WikiBit    |     2021-02-05T08:11:57
WeChat Sharing ×
Scan the above QR code via WeChat
Abstract：Decentralized exchanges are slower and more expensive than their centralized counterparts, but traders love them more and more as time goes by.

The use of decentralized exchanges has been increasing over the years. With cryptocurrencies making their way into the business world, activity in this sector is skyrocketing.

This makes them slower and inefficient, but traders gladly embrace this temporary issue because, among many perks, they dont need to comply with KYC requirements and other regulations and norms beside what is written on the smart contract, token listings is easier, and yield farming makes them interesting.

This record is more than double the mark recorded during September 2020, when trading volume on DEXs came very close to touching $30 billion. This happened at the peak of the DeFi boom. 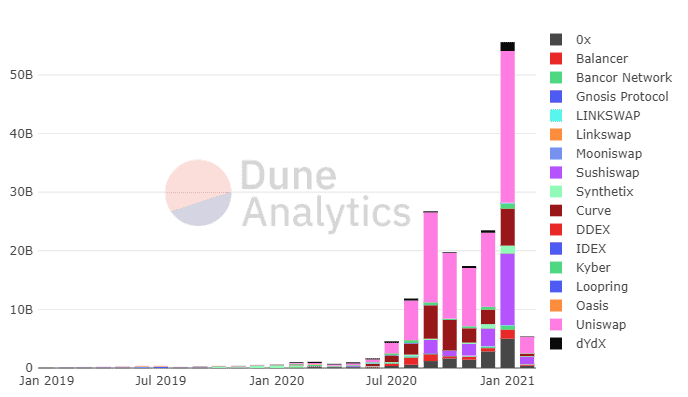 According to Dune Analytics statistics, Uniswap is the undisputed leader in the sector, with over $25.8 billion traded in August. This figure contrasts somewhat with research from The Block, which estimates that more than $30 billion were moved in that month. The Blocks research unit puts the record at $60.9 billion.

The runner-up exchanges are SushiSwap, 0x, and Bancor. Sushiswap controls nearly a quarter of all trading volume on decentralized exchanges, 0x holds 7.25% and Bancor 7.1%. 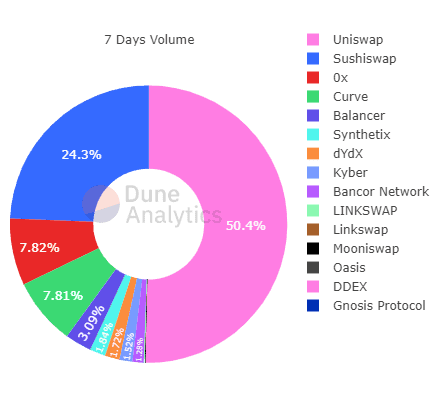 The Dune Analytics dataset does not take into account statistics from the popular 1inch exchange —which spiked over 1000% just after is listing. The firm did not disclose the reasons behind this omission. However, it is probably due to the short time the protocol has been in operation.

Another aspect worth considering is that Bitcoin supply on centralized exchanges declined to lows not reached in the last two and a half years.

Data compiled by Glassnode shows an almost inversely proportional relationship between the evolution of the Bitcoin price and the number of tokens stored on exchanges.

Glassnode shows that from April 2020 to date, centralized exchanges have seen their Bitcoin inventory drop from nearly 3 million BTC in custody to just under 2.4 million. This drop matches up precisely with the initial recovery Bitcoin had after the market crash of March 2020, which took it on an uptrend to its new all-time high above $40k per token.

One reason behind this drop may be that the price rise caused a greed effect among traders, who refused to sell in the expectation that their tokens would appreciate more and more over time.

Institutional investments must also be added to this. More and more firms are buying large quantities of Bitcoin to hodl for long periods of time. This causes a shortage in the markets that boosts up prices to rebalance the books.

However, with this rise of decentralized exchanges, it can also be important to follow Ethereum statistics and see new market trends.