Will The Bitcoin Miami Conference Be A Catalyst For Recovery?

WikiBit    |     1622794786000
WeChat Sharing ×
Scan the above QR code via WeChat
Abstract：Nevertheless, for sure it‘ll raise morale and give to the community and experience to rally around. And that’s whats going to take us to the next level.

The market needs a boost, that much is for sure. Luckily, the Bitcoin 2021 conference in Miami is just around the corner. Would that be enough to wake up the sleeping giant？ It might. It might now. Nevertheless, for sure it‘ll raise morale and give to the community and experience to rally around. And that’s whats going to take us to the next level.

In any case, Vailshire Capital‘s Jeff Ross gives us the technical analysis of the historical moment we’re facing. As for predictions, Ross is “Still noncommittal.” The situation remains as Bitcoinist told you recently:

Were in the midst of it. In retrospect, everything will make sense, but right now no human being has the necessary perspective to see the whole picture.

Even though the event is mostly sold out, the organizers dropped a huge bomb yesterday. Bitcoin Magazine and company announced an interview with the one and only Ross Ulbricht, live from jail. The Dread Pirate Roberts himself, the creator and main mind behind the legendary Silk Road marketplace in the darknet. Hate it or love it, an essential part of Bitcoins history.

In a shocking verdict that‘s still being contested, Ulbricht was sentenced to double life imprisonment plus forty years. Wow. It’ll definitively be interesting to hear what this man has to say. What else can we spect from Bitcoin 2021？

The most important thing is that there‘ll be a YouTube Livestream. This is the first day link, and this’s the second one. Apart from that, Bitcoinists already gave you two special reports with confirmed news, rumors, and the speakers line up. Here‘s the first report, and here’s the second one. If you dont feel like clicking, we can assure you two things.

Itll be a lightning-enabled madhouse:

Apparently, there‘ll be sumo wrestlers and UFC world champions walking around, holding their belts. Tony Hawk will speak and do his thing on a halfpipe, plus they’re selling an exclusive Bitcoin-themed skateboard only to people that attend Hawk‘s meet and greet. There’ll be a basketball tournament, a Bitcoin art gallery, and an eSports arena with Lighting based arcade games and more than 1 BTC in prizes. In fact, “Everything is Lighting enabled at the conference,” said Bailey.

The conference added Floyd Mayweather as a speaker and the community laughed and complained. Maybe they had a right to. But when “Bitcoin 2021” announced Former Congressman and ex-presidential candidate Ron Paul, the reaction was a roar of approval. The title of his talk is still unknown, but the tweet promises, “an important message that we need monetary freedom!” 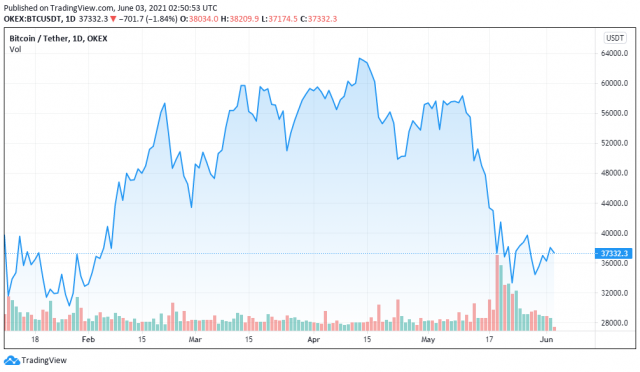 In a few days, well know if the pump is enough to move the dial

One of the organizers, Joe Rodgers, is already on site. Apart from reporting that Joe Buddens “Pump it Up” is on repeat, hes got this to say: And to that, we can only say: